Why to invest to Estonia

Estonia can offer a progressive business environment with an efficient and compatible infrastructure. Our e-services, mobile communications and internet applications are among the most progressive in the world. Estonians are adaptable towards new technologies, and use them willingly.

The attractiveness of Estonia is demonstrated by the large number of foreign investors doing business here and the dominance of world-renowned foreign companies in several of Estonia’s economic sectors. Foreign impact is also revident from the fact that exports represents more than 100% of Estonian GDP.

In Estonia, foreign investors are treated the same as domestic ones, and European Union subsidies, for instance, are equally available for both foreign and domestic companies.

Estonia’s advantageous and user-friendly business environment has attracted a great number of foreign investors and large companies of international renown to the country – Ericsson, ABB, Kuehne + Nagel, Stora Enso, Symantec, Stoneridge, Vopak EOS, Deutsche Post DHL and many others. The fact that Estonian banks are mostly owned by well-known Nordic banks, such as Swedbank and SEB, also speaks in favour of the reliability of Estonia’s business environment. 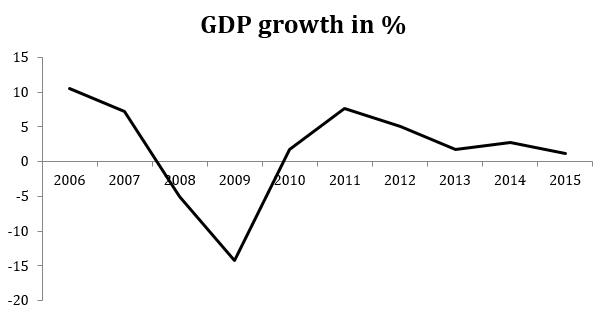 According to the forecast of the Ministry of Finance, the economy of Estonia will grow 1.3 percent this year and 2.5 percent in 2017.

“The current driving force of economic growth is domestic demand, which is based on private consumption. The increase of private consumption last year was three times as fast as the general economic growth, and this has shown that people’s lives have got better in the material sense, “ said the Minister of Finance Sven Sester. “If we look into the future, then forecasts imply that private sector investments will start to grow as well, as the situation on our external markets shall be improving and this will influence our economic growth positively.” 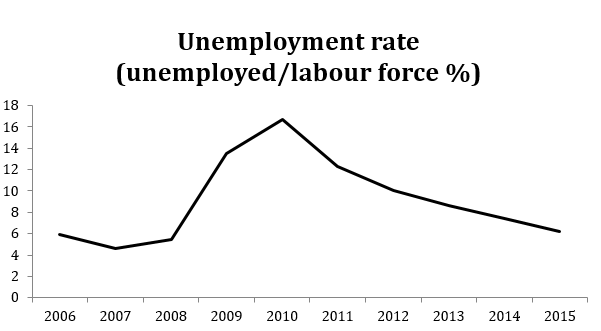 According to Statistics Estonia, the unemployment rate was 7.5% and the employment rate was 66.5% in the 3rd quarter of 2016. The labour force participation rate increased by 1 percentage point compared to the same quarter of the previous year and the number of inactive working-age people is on a downtrend.

Improvements in the economic climate, GDP and employment in 2011 – 2015 inflated consumption and growth in gross wages. Over the past five years, the growth of wages has been significant, on average 6% per year. At the end of 2015, the average gross salary in Estonia was €1,045. The cause of growing wages was the labor shortage in many sectors and the decrease in the working-age population 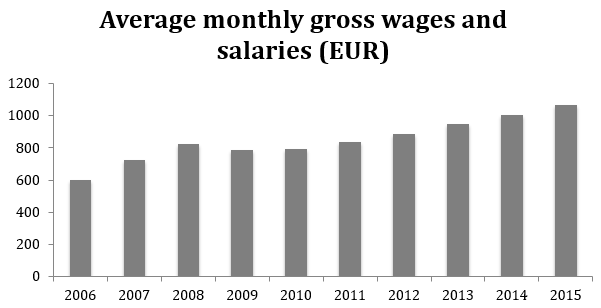 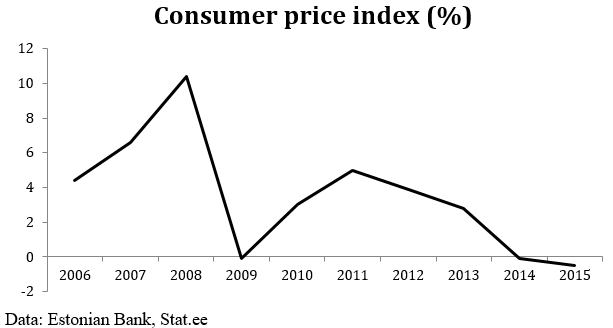 According to the forecast of the Ministry of Finance, The increase of consumer prices will remain modest in 2016 due to external factors, reaching 0.2 per cent. In 2017, the growth of consumer price index will reach 2.7 per cent and remain on that level in 2018 as well

The state budget for 2017 will contribute to growth, security and well-being

The cabinet of Estonia approved the draft state budget of 2017, with expenditures increasing by 650 million or by 7.3 percent over 2016 to 9.57 billion euros.

“This budget will help enhance contribute to the growth of Estonian economy, security and people’s well-being,” said Sven Sester, Minister of Finance. “We have a responsible budget policy. Our budget position target is a surplus of 0.2 per cent of GDP.”

Estonia economy is in a good shape that’s to historical strong fiscal discipline and fast adaptability of economy. For upcoming period GED data indicates stable economy with faster growth rate then 2015-2015 that’s to more favourable conditions in neighbour countries. We can characterize economy as stable and predictable.